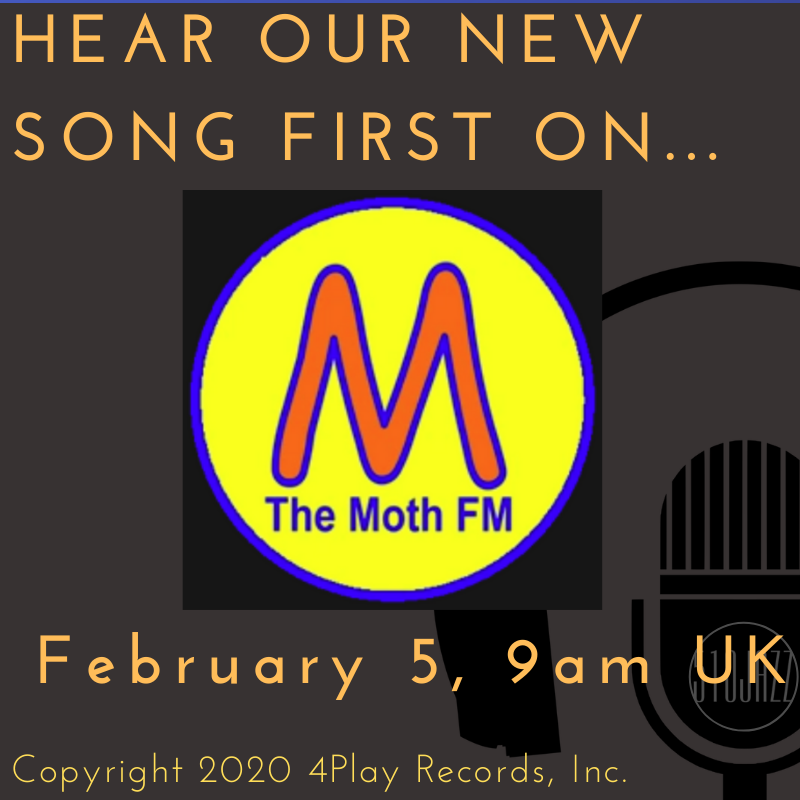 510JAZZ is bringing you new music on Valentine’s Day, February 14!

Hear our new song TODAY on The Moth FM

The show “Breakfast With The Dr” airs on Wednesday, February 5 @ 9AM UK / 2AM Pacific

We’re honored to be on The Moth FM Top 20 Smoother Jazz Chart for the fifth week. 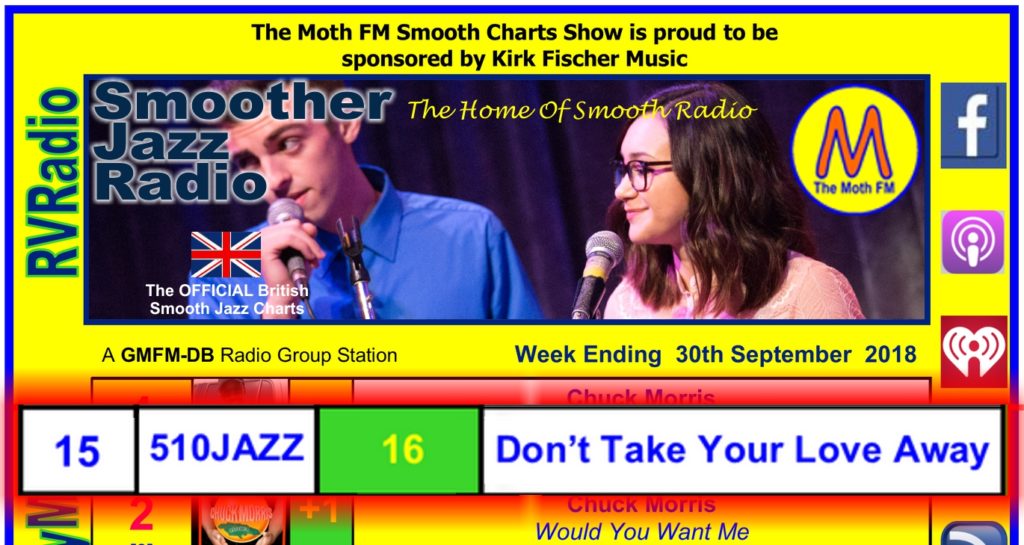 510JAZZ’s new song Don’t Take Your Love Away (ft. Nick Neira and Kristen Nicole) is #15 on the list. We’re delighted that our friends around the world love our music.

We’d like to offer a huge thank you to The Moth FM’s DrGlyn Reece for this wonderful news. What a Blessing it is to be in such good company on the Top 20 chart.

Vote For Our Song:
You can help 510JAZZ to move up the charts and be featured on next week’s show.  Here’s how:
1) Visit this URL: https://tinyurl.com/ycjm8rg3
2) Click on the “Request” button located to the right of the song title “Don’t Take Your Love Away”
3) Listen-in to the live radio show on Sunday, October 7 at 3 pm Pacific.

We’re honored to be on The Moth FM UK Top 20 Smooth Jazz Chart for the week ending September 2, 2018.

510JAZZ’s new song You’re Everything To Me (ft. Maya Victoria) is #20 on the list. We’re delighted that our friends around the world love our music.

We’d like to offer a huge thank you to The Moth FM’s DrGlyn Reece for this wonderful news. What a Blessing it is to be in such good company on the Top20 chart.

Listen to the song “You’re Everything To Me”

This Week In Radio

We at 510JAZZ strive to reach out to terrestrial and Internet radio stations all over the globe – to tell them about our music.  We’ve been Blessed with very strong support from some of the best.

We’re delighted to see songs from our new album “January 16” playing on 21 stations this past week (August 25 to September 1).  Our most popular song is Right Next To Me (ft. D-Varg and Matt Blaque) followed by the song You’re Everything To Me (ft. Maya Victoria).  These stations have played several other songs from our January 16 album as well.  We’re thrilled to see this acceptance from our friends in radio.

We encourage you to check out these superb radio stations as they are playing the best in Smooth Jazz every day – including songs from 510JAZZ.  Look them up on your favorite search engine and click on their “Listen Live” link.

My Love For Radio

Ever think about the music that defined you as an adolescent?  Movies like That Thing You Do remind me of the excitement that artists and composers feel when their song gets played on radio – whether it’s that first radio spin – or several years later after thousands of spins.

I can’t help thinking about Al Stewart’s 1978 release Song On The Radio.  Every time I hear our music, it’s just like hearing Al Stewart’s hit single when I was a teen – pure magic!

Radio has sure changed since those days.  During that time we listened to the radio, fell in love with a song and then went to the store to buy a 45 or LP vinyl album, cassette or CD.  Then we would play it over and over on portable players, in the car and at home.  Radio was always the catalyst, for our love affair with music.

In 2018 music is available everywhere – as close as your smartphone, tablet, laptop or desktop computer.  The one thing that remains the same is that radio continues to be the catalyst that drive’s music lovers to seek out that song and “put it into rotation” (on their mobile devices, computer, etc).

Radio has changed in a big way.  We now listen to a mix of terrestrial radio and Internet radio.  We no longer need to purchase that physical album at the music store.  The list of radio stations is massive now, to where some of the best stations can only be found on the Internet.

The one common ground here is that every radio station has a presence on the Internet.  So if your favorite songs are only played on a station in Sao Paulo, Brazil or Galway, Ireland – you can listen from where you are, via their live stream.

The Internet has made the music world a much smaller place.

On August 25, 2018, 510JAZZ’s John and David Vargas were interviewed by DrGlyn Reece on his show “Jazz and Coffee” on The Moth FM.

You can listen to this excerpt on our SoundCloud channel. In this interview, you’ll hear selected songs from our new “January 16” album. We talk about songwriting, our musicians and more!

This excerpt is taken from “Jazz And Coffee” show S01 E23.

This interview was recorded live on The Moth FM on August 25, 2018. Permission to use this excerpt has been granted by The Moth FM.

510JAZZ’s John and David Vargas are featured artists on The Moth FM!

Check out our live interview on “Jazz And Coffee”, hosted by DrGlyn Reece.

Hear songs from our new “January 16” album. We’ll talk about songwriting, our musicians and more!