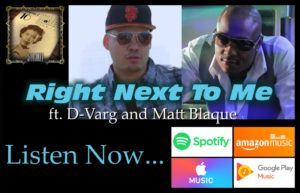 What They’re Saying…
The album opens with a medium paced Samba crossover with a big summery vibe.  It is a fun, bright and breezy number with hints of Michael Jackson (“Off The Wall” era) and Gloria Estefan’s Miami Sound Machine.  D-Varg’s rapping gives it an updated appeal to younger listeners who may not have heard music like this before.